An old gold mine, missing shares…

The Story Behind Paper Treasure

I’d been dawdling over the morning paper, sipping a cup of coffee and reading the business section — anything to avoid the blank page waiting for me upstairs — when suddenly I struck “story gold!”

A newly-formed Canadian company had its eye on an abandoned mine and, with the price of gold at an all-time high, was trying to find the original shareholders. The trouble was the old mine had been closed for so long, most of them didn’t even remember where their certificates were, let alone what they were worth…and without a majority ownership, the new company would be out of business before they even started. 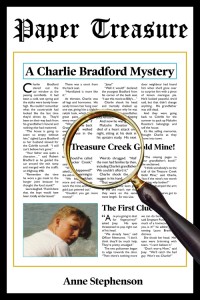 for middle readers. I had my main characters, 13-year-old Charlie Bradford, his annoyingly cute younger brother Joey, and Lisa Kirby, the girl next door.

Charlie’s grandfather had died six weeks earlier, and the book opens with the Bradfords coming back to Colville for the summer to pack up Malcolm Rossitor’s belongings and put the house on the market.

But for Charlie, selling the house is like selling memories….

When he was little, he used to spin his grandfather’s globe with his eyes closed. Then he’d stop it with his finger and try to guess which continent he was touching before he opened his eyes.

Once he’d had his finger on France, and his grandfather had told him all about World War Two and how he and five other Canadian soldiers had hidden in a barn in France for two days surrounded by enemy troops.

“Weren’t you scared?” Charlie had asked him.

“Aye,” said his grandfather, “but when you’re with your friends even the worst times don’t seen so bad.”

Especially when one of those friends has a secret.

The week before he was shipped overseas, Archie Spencer had been  prospecting for gold in northern Ontario.  He’d found it, but it was too late to register his claim.  There was nothing he could do but keep his mouth shut.

But this was war.  The six men made a pact.  Whoever made it home would give Archie the stake he needed to make his claim.  They’d all be equal partners in The Treasure Creek Gold Mine.

Ten years later, the gold had petered out.

It hadn’t, of course, but the cost of getting the gold out of the ground had gone up faster than its value!  And not just for my fictional shareholders.

It took years, but when mining became profitable again, those old share certificates had become Paper Treasure, and I had my story.  Complete with dividends, or as they say in the writing business, royalties!

All Charlie had to do was track down his grandfather’s missing shares, find the other partners before they’re tricked out of theirs, and save his younger brother Joey from a thief who will stop at nothing to get his hands on The Treasure Creek Gold Mine.  And, at the end of it all, hope that Lisa will still go to the movies with him!