On the road with Stephanie Browning!

Shortly after the publication of Outbid by the Boss, our first co-authored romance as Stephanie Browning, Susan Brown and I both headed for England.  Not together of course…that would be too simple!  Separate planes, separate schedules and separate plans, with just enough of an overlap for one of us to leave the other a note in the women’s toilets at Heathrow.

Stephanie Browning was here! scrawled in hot-pink lipstick across the door of 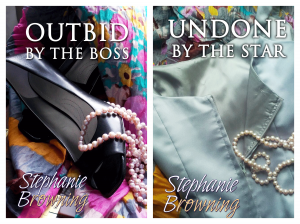 the fifth stall on the left!

It could have been me, or it could have been Susan!  We were both on a bit of a busman’s holiday really, searching out future locations while visiting friends and family.  Susan’s remit was to walk in the footsteps of our latest heroine, twenty-nine-year-old Alexis Kirkwood.  As head concierge at one of London’s most prestigious hotels in Undone by the Star, Alex needed to know how to navigate the city’s major attractions, score last- minute theatre tickets and jump the queue at exclusive restaurants, and therefore, so did we.

Meanwhile, my husband and I had moved on to the south of France, staying in a village near the fortified city of Carcassonne.  Which just happens to be in the grape-growing region of Languedoc-Roussilon where, coincidentally, one of Stephanie Browning’s future heroines (she’s “on the books” for the third in our Bedford County trilogy) will be interning at a chi-chi winery before coming home to start her own vineyard.  Lucky me!  You can’t write about wine unless you first sample the grape!

Being on location comes in handy, but when you are writing with a partner, having a shared “sense of place” is even better.  England has been an ideal setting for Stephanie Browning.  Susan and I have both spent a fair bit of time there over the years, and even hiked our way through Derbyshire’s Peak District — separately, of course — but when it came time for our main characters to set out for the hero’s ancestral home in Outbid by the Boss, we were “seeing” the same countryside.

And not just trusting it to memory, a lesson learnt when we were at a writers’ conference in Detroit, delivering a seminar on collaboration.  During the afternoon break, we had tea with Gay Courter, author of The Midwife, River of Dreams and Code Ezra, among others.  In preparation for Code Ezra, a novel of espionage and relationships, Gay had travelled to Israel with her family, a tape recorder and a camera.  With her husband at the wheel, Gay was able to sniff the air and record the sights and sounds of Israel as an aide-memoire for a later date.

We take a similar approach, whether we visit a location in real time or check it out online, because capturing that sense of place is an all-important part of our writing journey.  Knowing what type of spring flowers are blooming in Hyde Park during our story’s timeline, or what grapes are likely to thrive back in Bedford County are as necessary as picking the right shade of lipstick.

We figure another two or three trips per book, and we’ll have it sorted.  After all, research does require sacrifice, and that’s what writers do.

…Did somebody just say, “Italy!”