When I first met Charlie Resnick, John Harvey’s jazz-loving detective inspector, on the page in 1991, I was thrilled.  Here was a new series from a British crimewriter I hadn’t read before.  Three books in, and I was hooked — on Harvey’s award-winning command of the genre, and on his Nottingham-based copper.  For Resnick is the classic loner, weighed down by too many memories and not enough of a personal life.  My kind of guy.

By the time Easy Meat came out, the eighth in the series, I was reviewing crime fiction for the Ottawa Citizen, writing mysteries of my own, and about to teach a one-day workshop.

I called it How to get away with murder…in print!

All I had to do was put together a suitable outline knowing that, on the day, I should expect the unexpected.  And sure enough, there was this guy, sitting at the back of the room taking notes, and asking questions like “have you ever been in a police station?”.  I mumbled something about being in the back of a cruiser once, and next thing I knew he was asking me out to lunch…and taking my fingerprints.  As one does on a first date when the officer-in-charge is a detective inspector with the Ottawa Police.

But what happened next is total happenstance.  Richard (the aforementioned detective inspector) told me he’d spent his early years with the City of Nottingham.  I told him about John Harvey, and then fact and fiction merged.  Not only had Richard worked out of the same Canning Circus police station as John Harvey’s fictional detective, they also shared a connection to the Polish Club, Nottingham’s gathering place for the vast numbers of Poles who had remained after World War II.  There was nothing for it, but to go to Nottingham, meet the relatives (Richard and I were definitely an item by then) and walk the beat.  We made it a working trip, connecting with John when we went back down to London.

It was brilliant.  We met at Waterstones in Piccadilly Circus, grabbed a coffee, and talked shop, about crime writing and about the amazing coincidences between Richard’s and Resnick’s backgrounds.  Even their take on Nottingham was the same “a gritty 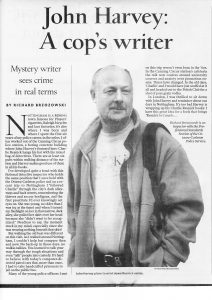 When we returned home, Richard wrote a piece for the Ottawa Citizen about “following Charlie” through Nottingham’s dark alleyways and back streets, remembering the thieves and soccer hooligans, and the first prostitute he’d ever set eyes on.  “She was young, no older than I was (19 at the time) and when I turned my flashlight on her in that narrow, dark alley, she pulled her skirt over her head because she didn’t want to be recognized.”

He ended the article by suggesting he had a “great idea for a book that brings Resnick to Canada.”  It didn’t quite happen that way, but in Darkness, Darkness, John’s twelfth and “final” Resnick published in 2014, he gave a nod to Richard in Chapter 49,

“Resnick had known an inspector in the Notts force who’d gone out to Canada…Brzozowski.  Polish descent like himself.  Good policeman, good detective.  Resnick had liked him.  Would have bet good money he’d more often then not got his man, too.”

Or, in this case, woman! 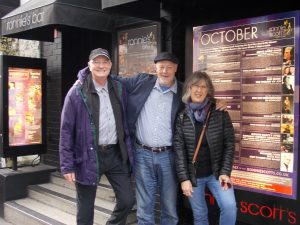 Over the years, twenty as of this writing, we’ve met up with John whenever possible, sometimes in Nottingham, where lunch at the Warsaw Diner was always a favorite, or in London at Foyles on the Charing Cross Road.  Last autumn it was Soho with John bringing us up-to-date on his most recent project:  his adaptation of Darkness, Darkness which had just finished its premiere run at the Nottingham Playhouse .

Unfortunately, our timing was off, but with a little luck we’ll be back in England for an early spring, and the release of Body & Soul, John’s fifth “Frank Elder” novel.  Totally different series (although Elder is ex-Nottingham, of course!) from a very prolific, and engaging, writer.

Lonely Hearts, John’s first Charlie Resnick novel, was named by the London Times as one of the “100 Best Crime Novels of the Century.”  And in 2007, he was awarded the Crime Writers’ Association Cartier Diamond Dagger for Lifetime Achievement.

Body & Soul will be published in hardcover by William Heinemann on April 18th.