The Perils of Writing Romance!

When Samantha Redfern walked into the dining room at Porter Hall wearing nothing but the sheerest of nightgowns, Susan and I were aghast! We were only three chapters into Outbid by the Boss, our first contemporary romance writing as Stephanie Browning, and our heroine was already breaking the rules.

She should have been safely tucked up in her own bed, by herself, for at least 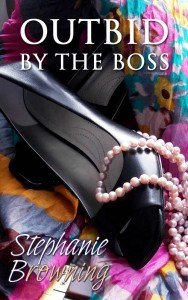 The problem was Chas “bloody” Porter. From the moment they bumped into each other at an estate auction north of London, we were doomed:

Her lids fluttered open and she followed the buttons of the beautifully-stitched, pale-blue Oxford-cloth shirt he wore beneath his soft leather jacket to the button at the base of his neck. It was open. Revealing enough of the man to make one feel that every inch of him would be just as enticing as the dark stubble on his chin, the slightly battered but still patrician nose and…the steel-blue eyes washing over her like an Arctic wind.

And who could blame her? This guy’s the real deal! Handsome, rich, and already half-in-love with the delectable Miss Redfern.

We made the same mistake in Undone by the Star….

As heir-apparent to one of London’s most exclusive hotels, Alexis Kirkwood has spent her life preparing for the top job. But even heirs-apparent can have an off day. Especially when a drop-dead gorgeous movie star sneaks in the tradesman’s entrance, and finds the one woman in London who has no idea who he is. 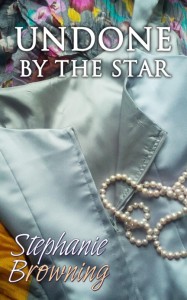 Her eyes dropped to the scuffed work boots, automatically checking them for dirt, swept up the length of his jeans, tantalizingly snug, and then landed on the beat-up canvas hold-all in his left hand. Her gaze rose, drawn by the square jaw brushed with the perfect shadow of a beard….

If this was the guy they sent to fix the toilets, she would have to spend a little more time in maintenance.

Alex might have mistaken Marc Daniels for a plumber, but there was no mistaking their attraction. That’s why writing romance is such hard work. From the moment they meet, you know your main characters are destined to be together, but it’s your job to keep them apart.

And then, just when everything is going really well, you callously break their hearts. (Commonly known as the “black moment” in the romance business.) Leaving you with roughly 5,000 words to patch them back together again.

Without any help from all the king’s men…or even his horses!