Worn by a bridesmaid…Undone by the Star! 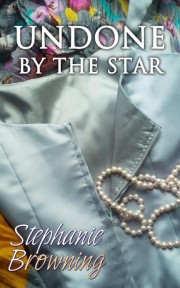 As soon as Susan and I found our storyline for Undone by the Star, our second Stephanie Browning romance, we immediately started thinking about the cover. We’d been thrilled with the image and design for Outbid by the Boss, and wanted to replicate the look.

But how? And with what? We had yet to write the scene that would riff off the title and give us that double-entendre we had so cleverly come up with. Something to think about, we decided, as we continued writing.

Now I’m not the best sleeper in the world. Conundrums like finding the right image, the right word, or even the right title tend to be my version of counting sheep. (I’ve tried counting money, but I always run out before I nod off.) So there I was thinking about what our drop-dead gorgeous film star might be “undoing” when I remembered the bridesmaid’s dress my daughter Lindsay had worn to her friend Emily’s wedding.

It would be perfect: two-piece, gorgeous silvery-blue peau de soie, and…the bodice had a back zipper! My imagination soared. We could use the same scarf we’d used for the cover of Outbid by the Boss as the backdrop, drape the pearls across the back of the bodice, and with the zipper partway down to add a whisper of intent, we’d have our cover shot! 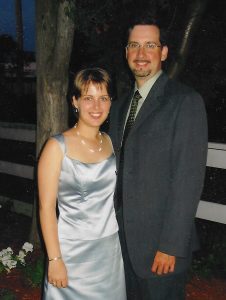 Lindsay with her husband Chad

Problem solved – I could go to sleep.

But just as I was drifting off, I swear I heard Jane Austen…

“It is a truth universally acknowledged,” she cooed in my ear, “that once a wedding is over, a bridesmaid’s dress is rarely, if ever, seen again.”

I closed my eyes and tried to picture the garment bags hanging next to the winter coats in the guest room closet at my daughter’s. As if that would help. It was now ten past three. Lindsay would be up in a couple of hours. All I had to do was wait.

I fell asleep of course. Mothers do that when they’re old…they also hoard bridesmaid’s dresses. I’m sure I’ll give it back one day, but in the meantime…it’s in my cupboard now!

Spoiler Alert: There are no bridesmaids in Undone by the Star, but the bodice pictured on the front cover does indeed belong to my daughter Lindsay.