Call it what you will, “the necessary” is the perfect setting!

It’s true; everything Susan and I have written together invariably features a bathroom scene. It is the most versatile of locations, and it doesn’t seem to matter whether our heroine is twelve or twenty-nine, sooner or later, she’ll have to go. Not that she actually ever “goes,” although in Outbid by the Boss, we had to give Samantha Redfern a break because…

“She really was bursting for a pee. And a little privacy because this, she fumed as she locked the cubicle door behind her, was probably her last chance for either.”

And it was. Sam never did get another chance to relieve herself in the entire book, at least not on the page. But she did get time for a frantic call to her friend Mia while her boss waited impatiently to whisk her away to his ancestral home where they, of course, fell in love.

Not all bathroom scenes end that way. From films to novels and series television, characters surreptitiously hook up with one another in public toilets, hide from villains in the one room in the house with the smallest window, and often meet their end in the most gruesome ways.

Nonetheless, taking refuge in the rest room is a time-honoured tactic. 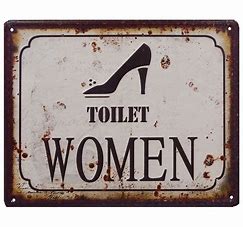 It’s also useful if you don’t have an office in downtown Toronto. Back in the day, we used to collate our scripts in a seldom-used ladies’ room at the Delta Chelsea before we began writing romance novels as Stephanie Browning. Worked a treat!

In Undone by the Star, the second in our London trilogy, head concierge Alexis Kirkwood takes a ribbing in the staff lounge at the exclusive Sadler Hotel (we do like posh hotels) after a close encounter with a new guest…who just happens to be a drop-dead gorgeous movie star.

Alex uncapped her lipstick. “What exactly did you hear…not that I’m interested.” She touched up her lips, her face reflecting studied nonchalance.

“Well…” said Kate, “…according to my sources…first, Marc Daniels tricks you into personally escorting him to his suite, and then, mere moments later, the plumber wanders out of the loo to find Mister Daniels undressing you, with his teeth, ripping the teeny tiny buttons off your shirt while you pretend to fight him off…”

“Which you, of course, totally believe!”

“Are you kidding me! What woman in her right mind would fight him off?”

“Actually, I was swooning with ecstasy!” drawled Alex.

“Really?” Kate’s eyes threatened to pop out of her head.

“Nooo… If anyone got caught in the act, it was Bert. You should have seen him. Just as I was telling Marc there was a problem with the toilet, it flushes, and out comes Bert hoisting up the back of his pants!”

“And you’re blushing because….”

She’s falling in love. Alex might not know it yet, but we had it all arranged. Marc and Alec were destined to be together and, as far as we know, still live happily ever after.

Ironically, our first co-authored “toilet scene” was in The Mad Hacker, a juvenile mystery we wrote for Scholastic featuring 12-year-old super sleuths Amber Mitchell and Liz Elliot.  Liz is hiding out in the girls’ washroom waiting for Amber when in walks Jane Dobbs, Amber’s arch enemy.

Liz leapt up on the toilet seat and crouched down, praying for balance and Amber’s speedy return.

“If you ask me,” Jane was saying to another girl in her unmistakable whine, “Amber’s hot for Jonathan. Why else would she stick up for him?”

“Amber always sticks up for people,” came the reply. “She’s been doing it since kindergarten.”

That has to be Karen Lee, thought Liz.

“Well I want to know where they are,” insisted Jane. “The police wouldn’t have sent for Jonathan if Liz and Amber had been at lunch. They’re up to something.”

“Probably,” replied Karen. ‘They usually are. But I bet they won’t tell you.”

“Just a minute. I have to go to the washroom.”

Liz lost her balance and almost fell into the toilet. Then the door swung open, and there she was, perched on the facilities like a vulture with cramps.

The colour drained from Karen’s face.

Liz grabbed some toilet paper and shoved it at her.

Karen stared back. “I think I’ll go later,” she called to Jane, then she grinned at Liz and shut the door.

We had a lot of fun with that scene, especially when we adapted The Mad Hacker for television — at which point “location” took on a whole new meaning!