I think the die was cast the day my Latin teacher suggested I translate Caesar’s Gallic Wars at home. They called it “independent study,” but when she wrote “goodbye, little Miss Sweet-n-Sour” in my high-school year book, I knew it to be true.

I had crossed her personal Rubicon once too often.

Which pretty well sums up the driving force behind the mystery shorts I write. Whether it’s a serial bride in Bitter End, a honky-tonk piano player in Oscar Chump! or even a slightly-psycho claims adjuster in Bermuda Short, once someone crosses their line in the sand, they’re all about revenge.

Ironically, when I first thought about bringing these stories together, I wasn’t sure what connected them. Louise Tellier Hannington Brown had been racking up her assets the old-fashioned way while Oscar Chump kept his in his closet, and as for Carolann Gravelle, no sooner did she find true love than she lost it again.

So she bided her time, made her plans, and flew to Bermuda two days after her former lover and his new bride. 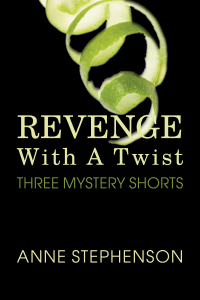 …Had it been any other Tuesday, she would have been at her desk in suburban Toronto, processing death claims for Parkwood Life and Casualty. But not today. Today, she was flying first class “drinking champagne and dreaming about death and dismemberment amidst the bougainvillea.”

Poor Carolann. But lucky me!

I had just returned from Bermuda, with the sights and sounds of the island still fresh in my mind, when there was a call for submissions to Cold Blood IV, part of a long-running anthology edited by Peter Sellers, and published by Mosaic Press. They were looking for original stories and dangling a huge carrot…the book would be launched at Bouchercon, the international convention for mystery writers, to be held in Toronto the following autumn.

And then there’s Oscar Chump, a small-town mystery with a fifties’ feel. For years, all I had was the title and the lyrics from a 1956 rock-and-roll song by Jim Lowe continually playing in my head. He kept asking “Green Door, what’s that secret you’re keeping?”   I had no idea, so I asked Oscar Chump. I’m pretty sure the secret I came up with wasn’t exactly the answer Jim Lowe had in mind, but I had my story.

We’ll file that one under writer’s revenge.

And while divorce does turn deadly in Bitter End, I swear this one’s total fiction. Except for maybe the odd bit about sailing (I had a part interest in a twenty-one-foot Shark at the time), and an article I had recently read about forensic accountants searching for the hidden assets of a deposed dictator. In my short story, the assets are, shall we say, far more personal…and it definitely ends with a twist!

Author of Revenge With A Twist, & other stories