When I first started reading mysteries, it was all about Nancy Drew and the Hardy Boys and their uncanny ability to get out of any small-town scrape that came their way.  They didn’t need rescuing and neither do the kids in the books I like to write.  Or the adults, for that matter.

Although I didn’t realize it at the time, letting the kids solve their own problems was the secret, for me, to a good read.  In a world dominated by adults, those stories were a refuge.  They helped shape my sense of self as I moved through my teen years, and ultimately, my choice of career.

One of the first books I wrote was for eight to 12-year-olds. 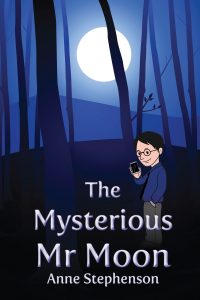 The Mysterious Mr. Moon follows the adventures of Peter and Allison Martindale as they adjust to life in the small town of Maple Bay.   Their parents, as the new owners of the Coach House Inn, are struggling to make ends meet.  Especially during the off-season.

So when a mysterious stranger comes to stay, they welcome him with open arms.  But Peter and Allison are not so sure Mr. Moon is who he appears to be.  For one thing, his interest in Mrs. Gruger, the town’s wealthy widow, is decidedly suspect, and he refuses to have anyone enter his room — even to change the sheets!

After tracking his every move, by Chapter Ten, Peter and Allison are convinced Mr. Moon’s about to bump off Mrs. Gruger, And they have the “hard evidence” to prove it…

“Oh, by the way,” Mr. Moon said to Mr. Martindale.  “You are still serving beef stroganoff tomorrow night, aren’t you?  I’ve asked Mr. Gruger to join me for dinner.”

Peter froze in the doorway.  Beef stroganoff!  Of course!  Why hadn’t he thought of it before?

Allison lay in bed listening to the wind.  The shutters rattled and the old maples creaked with each new gust.  The waves would be crashing against the cliff, carving out giant scoops of earth and carrying them away.  A perfect night for a murder.  She shivered and pulled the covers up to her chin.

There was a rap on the door.

Allison sat up, the blankets clenched in her fists. “Who’s there?” she called in a squeaky voice.

“Peter, your brother!  Remember me?”  The door swung open and Peter’s shadow entered the room.  He stood in the doorway, his lean figure illuminated by the hall light.

“I’ve figured out how he’s going to do it,” he announced, striding into the room.  “Beef stroganoff!”

“Beef stroganoff?  Peter, what are you talking about?”

Peter plunked himself down on the edge of Allison’s bed.  “What is it,” he said patiently, “that you don’t like about beef stroganoff?”

“Mushrooms,” his sister replied automatically.  “You know that.”  Her hand flew to her mouth.  “There’s mushrooms in beef stroganoff.”

“And guess who Mr. Moon has invited to have dinner with him tomorrow night?”

“Exactly.”  Peter hopped off the bed and began to stride around the room.  “Mom is always saying you can hardly taste the mushrooms in beef stroganoff, right?”

“So all he has to do is slip the Angel of Death into the beef stroganoff, and presto!  No more Mrs. Gruger!”  Peter stopped dead in his tracks.  “I just thought of something.  What if everybody thinks it’s food poisoning?”

“Then Mr. Moon will get off scot-free and nobody will ever come to the Coach House Inn again,” cried Allison.  “Then we’ll really be poor!”

Needless to say, the kids and their friends saved the day in Chapter Twelve, The Deadly Dinner, with the added bonus that Mr. Moon wasn’t such a bad guy after all….

Now available in paperback on Amazon