The first time I saw Susan was at Camp Etobicokee. We would have been about eleven that summer, gawky in shorts and t-shirts and sticking fast to the kids we already knew. The morning activities were over and Susan was at a picnic table on the far side of the clearing eating lunch with her gang while I, and my group of hormone-ridden preteens, sat opposite eating ours.

The lines had been drawn. Nostrils flared, and for some inexplicable reason, Susan’s eyes locked on mine, and war was declared. And every day at noon from then on, we took up our positions and glared at each other with great hostility as we sipped on our chocolate milk. 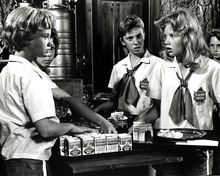 The Parent Trap, the movie that had every girl desperately wanting to be an identical twin, had opened in Toronto two weeks earlier. With British actor Hayley Mills playing both parts, the “sisters” show up at Miss Inch’s Camp for Girls totally unaware of each other’s existence. Naturally, they become arch enemies, then best friends and one big happy family by the end of the film.

It took us a lot longer.

My family had moved to London; Susan’s had stayed in Toronto and then, all of a sudden, eight years had passed and it was time to go to university. I packed my bags and headed for Ottawa, picked up the keys to my dorm room and, with great excitement, opened the door and came face-to-face with my new roommate!

I honestly can’t remember what happened next. I suppose Susan and I were simply too stunned to do anything but declare a truce and divvy up the closet space. By the end of the day, we were fast friends, both studying journalism and sharing our “camp story” with anyone who would listen.

A dozen years later we started writing mysteries together, like the ones we read as kids. And even though we haven’t lived in the

same city, or even the same country since university, and still don’t, we co-authored two highly-successful children’s mysteries — The Mad Hacker and Something’s Fishy at Ash Lake — and went on to adapt them for television.

Ironically, while checking the release date for the original version of The Parent Trap, I discovered that it, too, is an adaptation. The original book, Lottie and Lisa by German author Erich Kästner, was published in 1949. Kästner, who is known the world over for Emil and the Detectives, died in 1974, but his beloved tale of the resourceful Emil, lives on.

As does The Parent Trap, which was remade in 1998 staring Lindsay Lohan, allowing us to retell our “camp story” over and over again!

And while we’re busy writing our third Amber & Elliot Mystery, we hope you’ll enjoy The Mad Hacker and Something’s Fishy at Ash Lake available now on Kobo  and  Amazon