The Goddess of Single Women

When Susan Brown and I were working on Outbid by the Boss, our first co-authored romance, we had no idea our heroine would suddenly invoke the Goddess of Single Women.  In fact, we didn’t even know there was one until Samantha Redfern found herself in dire straits…although to be fair to the Goddess, it was Sam who made the decision to blow off her trip to New York.

But to get caught by one’s boss at an estate sale north of London…now that’s just asking for trouble!

Two books and one boxed set later, we’re still amazed by the Goddess’s serendipitous appearance on the page…

From Chapter One, Scene Three, Outbid by the Boss:

Clutching the candlestick to her chest, Sam hurried for the exit. She had a plane to catch. And now, she realized with a frisson of panic, she not only had to nip back to her flat, she also had to stop at the bank. It would take all her savings and half her rent money to replace the firm’s cash, but her purchase was worth every penny.

As she dashed through the open doorway, Sam remembered thinking how nice it was that the morning rain had given way to a sun-filled afternoon and then…

She ran smack into a wall of solid masculinity, gasping as the base of the candlestick dug into her rib cage.

She staggered backwards. A pair of strong hands grabbed her upper arms to steady her, holding her fast as she regained her balance.

And then he spoke.

The “thank-you” Sam was about to utter caught in her throat. 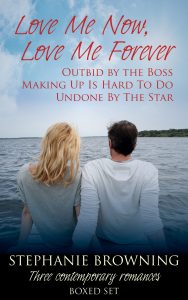 “In a hurry, are we?” The voice was well-bred, well-schooled and awfully familiar.

She squeezed her eyes shut.

And began to mentally chant.

“Anytime…” the voice said, rudely interrupting her pleas to the goddess of single women caught in compromising positions.

Stupid woman must be on a lunch break, thought Sam.

Her lids fluttered open and she followed the buttons of the beautifully-stitched, pale-blue oxford-cloth shirt he wore beneath his soft leather jacket to the button at the base of his neck. It was open. Revealing enough of the man to make one feel that every inch of him would be just as enticing as the dark stubble on his chin, the slightly battered but still patrician nose and…the steel-blue eyes washing over her like an icy Arctic wind.

“Miss Redfern, isn’t it?” Chas Porter said, his voice dripping with sarcasm. “I could have sworn you were representing us in New York this week. You do remember the two-day sale at Sotheby’s? Previews in….what?” He removed his left hand and checked his watch. “Twenty-four hours?”

“Which, allowing for the time change,” replied Sam choking back an urge to flee “gives me twenty-nine hours…

“Now, if you don’t mind…” She pointedly eyed the hand grasping her left bicep, an amazing feat given the fact that her knees had turned to water and her brain was sending high-pitched alarm signals to every nerve in her body.

Chas dropped his hand and stepped back, his eyes resting on the candlestick nestled protectively between her breasts. “Very nice workmanship. Get it for a good price, did you?”

Sam flushed and like a child caught with her hand in the cookie jar, whipped the candlestick behind her back. Which of course thrust her chest forward.

She raised her chin defiantly.

Chas Porter gazed down at her, his eyes slightly hooded, impossible to read.

She stared back at him. The candlestick was hers. Or was it? She felt an unexpected stab of fear. Had he seen her use her expense money to pay for it?

A young couple coming up the steps dropped hands and gave them a wide berth. “We are blocking the entrance,” hissed Sam. “And, as you so rightly pointed out, I have a plane to catch.”

“Not today, you don’t,” Chas shot back. He crooked his finger and abruptly turned away leaving her little choice but to follow him down the steps and around the side of the building.

For an instant, Sam rebelled. Who did Chas Porter think he was, calling her to task as though she were a lowly serf. He was her boss, she reassured herself as she hurried to catch up, not some feudal lord who expected her to do his bidding. Perhaps she should just tug her forelock and be done with it…

As expected, Chas and Sam had their happily-ever-after, and as The Goddess of Single Women has yet to reappear, we like to think she’s found hers too.