When I wrote the following article, in late 2017, Susan and I had already reissued Something’s Fishy at Ash Lake for a new generation of young readers, but The Mad Hacker, book one in the series, remained out-of-print, patiently waiting for an update and a new cover…. 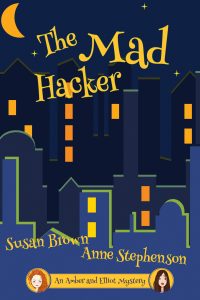 How we almost hit the big time & lived to tell the tale!

When Susan Brown and I decided to adapt The Mad Hacker, our first co-authored book, for television, we realized we would have to come with a name that was perhaps a little less indicative of an axe murderer, and more in keeping with a pair of adventurous twelve-year-olds.

Amber Mitchell and Liz Elliot had been best friends forever and were, shall we say, chips off their creators’ old blocks…

The plotline revolved around the sabotage of their grade-seven computer projects. Rather progressive, we thought (and still do) given that we wrote the first chapter of The Mad Hacker in 1985 using typewriters. Neither of us actually owned a personal computer at the time. Our kids were in primary school; they had the access and we had the story.

Several years later…The Mad Hacker had sold over 75,000 copies in book form in Canada, New Zealand and Australia, Something’s Fishy at Ash Lake, our second book featuring the girls and their friends at Ash Grove Junior High, had by then been sold to Scholastic Canada, and negotiations were underway with a Toronto production company.

We decided it was time to “rebrand” the series. Scholastic had billed the first two books as Ash Grove High Mysteries, but we 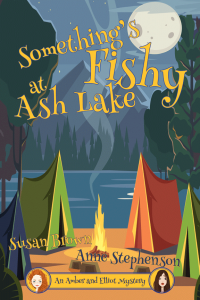 wanted something new and a little less cumbersome. So we culled our collective memories as well as the current TV pages, listing show titles that worked, especially mysteries, right back to the early days of television.

Nine times out of 10, the most successful series had titles which were either situation-specific or simply used the main character, or characters’ names, to sell the show.

Our characters weren’t that well-known, but they were memorable, especially when they played off each other like that other famous pair of detectives: Dr. Watson and Sherlock Holmes. After all, Amber had been heard to address Liz as “my dear Elliot” more than once in both books.

So, Amber & Elliot, it became.

We liked the cadence. We liked the way Liz’s surname gave the team more weight. But most of all we liked the fact that it didn’t sound, as “Amber and Liz” would have, like two little girls going to a birthday party.

Amber & Elliot may not have made it to the big time (the pilot aired on The Family Channel and CTV), but we felt like we did – if only for a short time. And, among many lessons learned, we came to appreciate just how important titles (and hanging onto your rights) can be!

And coming soon, our third Amber & Elliot Mystery:  The Secret of the Lost Diamonds!