A Sense of Place…

From a long-ago visit to Meadowbrook Hall to a new Amber & Elliot Mystery!

I recently sent three of my children’s books to relatives in Texas. They have grandchildren living nearby, and others in Michigan, who are just the right age for the stories I write. And while I do write for adults as well, capturing that “sense of place” is key. The world in which your characters live and breathe gives their story, and yours, the veracity it needs to draw the reader into the world you have created.

Having grown up around the Great Lakes — my family had a cottage on Lake Huron for 30 years — most of my books for young readers are set in small-town Ontario. Or, in  the the case of the Amber & Elliot Mysteries, which I co-author with long-time friend Susan Brown, an unidentified location that works on both sides of the border. 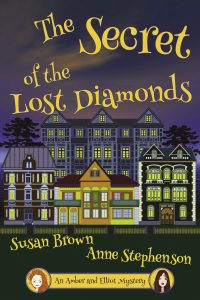 And we have just released our third Amber & Elliot which was inspired by a stay at Meadowbrook Hall in the mid-1980s. As presenters at the Detroit Women Writers’ conference (held at Oakland University), we were “billeted” in the bedroom that once belonged to Frances Dodge, daughter of automotive tycoon John F. Dodge.

It was awesome! Beautifully furnished, with four-poster beds, richly upholstered chairs, and leaded glass windows overlooking the garden. We spent two nights at Meadowbrook Hall, discreetly exploring its secrets, and tucking them away for a future novel. Little did we know how long it would be before we had the time, and opportunity, to tell our story.

The Secret of the Lost Diamonds

In a last-ditch effort to save his family home, Henry Hamilton agrees to host a writers’ conference at Ash Manor. On one condition — he wants super sleuths Amber Mitchell and Liz Elliot to find the famous Hamilton diamonds before it’s too late!

The stakes are high from the moment they walk in the door. With mystery writers looking for the perfect plot, and their friends Craig and Jonathan skulking in the shadows, Amber & Elliot take to the secret passageways in search of the precious jewels…

“Where are we?” Amber whispered.

“We must be in the family wing,” Liz said softly.

The girls stared at the old-fashioned furnishings: paintings in gilt frames, a pair of plush sofas, and two leather wing chairs facing a fireplace.

“I bet no one’s been in here for years,” breathed Amber, taking a step forward.

Suddenly Liz choked out a scream. Amber clutched her throat. They watched in horror as a hand slowly reached out from behind the chair…

To find out what happens next in The Secret of the Lost Diamonds visit Amazon, Kobo & Apple 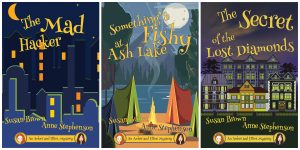 The Secret of the Lost Diamonds on Amazon, Kobo & Apple